A surprising oasis hidden in the middle of central Australia’s arid zone, Palm Valley is a place of spectacular scenery and rugged landscapes. Home to the rare Livistonia maria or red cabbage palm, Finke Gorge National Park (NP) is a definite must-see on anyone’s bucket list.

The adventure starts as you approach Hermannsburg, the last town on the black tar with fuel and a supermarket. Hermannsburg preserves its remarkable heritage in a historic precinct – a living museum showcasing the original buildings of the Lutheran Mission, constructed in 1877. During those early settler years, the community was the largest in central Australia.

Hermannsburg is also the hometown of Albert Namatjira, the famous Aboriginal watercolour landscape artist. His legacy lives on in his descendants who continue to pass on his remarkable tradition. 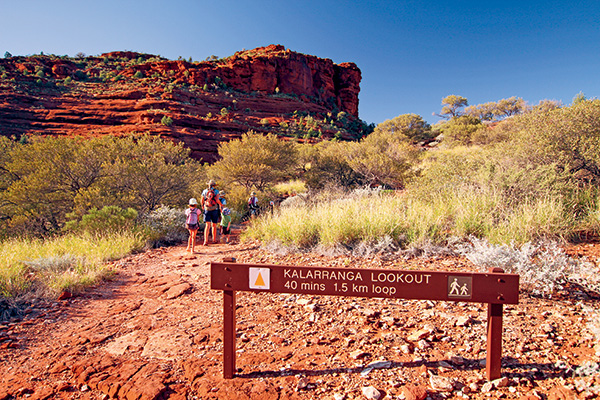 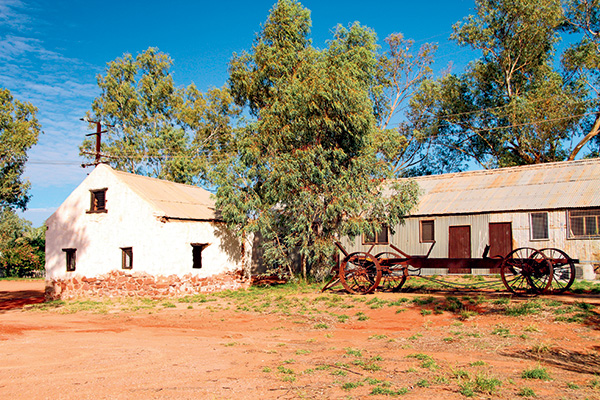 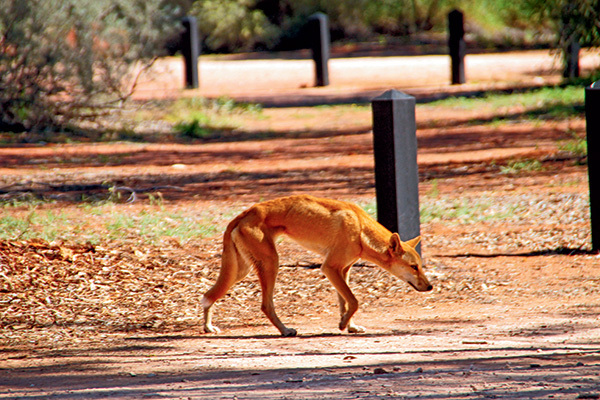 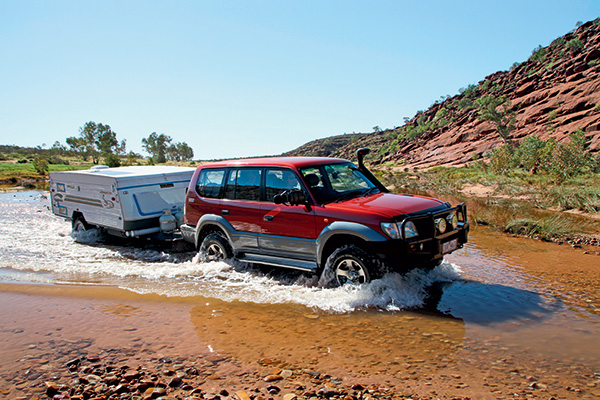 As you leave Hermannsburg, the turn-off to Palm Valley is just a couple of kilometres down the road. The red dirt beckons, though the sign ‘Severe 4WD route – allow three hours’ appears to be an attempt to deter travellers from undertaking this exhilarating journey through one of central Australia’s most magnificent landscapes.

Having spoken to one of the resident rangers the day before we left, we knew the road was in good condition and water levels had dropped quite considerably after the heavy rain had battered the region two weeks earlier, flooding the Finke River.

The park had been closed for a week as the 4WD track became impassable, trapping three people inside the park. One couple actually decided to stay when the ranger warned them about the bad weather coming their way – they wanted to see the park in flood and had ample supplies to camp out for a week. A third traveller, who was apparently unaware of the treacherous rain about to hit the area, drove into the park the night before the rain started and had no choice but to make the most of a bad situation. Yep, it pays to check the weather forecast before heading out bush.

Before starting our journey down the red dirt, Chris let down the tyres on the Prado and Jayco Outback Flamingo for a smoother ride and to reduce the likelihood of a rock piercing the rubber. As this was the first time we were taking our camping rig offroad, we taped up the vents and any other spots we suspected might let dust in. It’s a 10 minute job which can save you a lot of work later on, depending on how dustproof your rig is.

Then the adventure began. Leaving civilisation behind us, we headed into Finke Gorge NP, excited about our four-day campout. The first river crossing confirmed the water had dropped to about 30cm, making for an easy trip in. Rolling hills were soon replaced by impressive mountain ranges and the typical ochre-red rocks of central Australia. Criss-crossing the Finke River several times we drove into Palm Valley campground after roughly 1.5 hours.

The campground took us by surprise – it was simply stunning. Flat, spacious sites surrounded by large river gums dotted the area next to the picturesque Palm Creek which still had water in it, to the kids’ delight. Stunning views of the ochre-red rock formations place this destination at the top of my list of favourite camping spots. We picked a shady site close to the amenities, setting up in record time so we could explore the park.

Early the next morning we jumped in the car to head out to Palm Valley. The 4km 4WD track to this iconic destination can be rough in places and needs to be navigated with care. Washouts, several water crossings and steep rocky climbs are all part of the adventure. Be sure to stop off at Cycad Gorge to admire the MacDonnell Ranges cycad, which grows only in the Central Australian Ranges. These plants grow mainly on rocky slopes in sheltered places where their roots can penetrate deep into moisture-trapping rock crevices.

You know you’ve reached Palm Valley when you see towering palm trees, swaying in the breeze. It’s amazing to think these red cabbage palms are only found in this one location in the middle of Australia’s arid zone.

The valley can be explored via two scenic walks. The easy one-hour Arankaia (Aboriginal word for red cabbage palm) Loop Walk meanders past the lush groves of the valley and, in our case, we could enjoy the waterholes and billabongs. Birds flew overhead and filled the air with their continuous chatter. Palm seedlings were shooting up everywhere, making the most of the recent rain.

Instead of finishing the Arankaia loop, we joined the 5km Mpulungkinya Loop Walk, taking us deeper into the valley and up the sandstone plateau, affording us with extensive views across Palm Paddock. As we stood looking out over the green plains against a clear blue sky, we felt so insignificant being surrounded by such an awesome and timeless landscape.

It was difficult to pull ourselves away but as the sun was climbing higher in the sky, the temperature was about to reach 30°C and it was getting too hot to be out and about. The remainder of the walk led us across the plateau, past a variety of colourful wildflowers and tall ghost gums.

Two hikers, walking the track in the opposite direction, warned us of a couple of dingoes they had come across. These wild dogs are common in the deserts of Australia, surviving where most animals can’t. We kept an eye out but never saw the creatures. The final part of the hike took us back down to the lush valley where we enjoyed lunch at the picnic area, under the shade of the gazebo.

Palm Valley is situated in Finke Gorge National Park, 138km west of Alice Springs. Turn south off Larapinta Drive just west of Hermannsburg. Access along the last 18km of track is limited to high clearance 4WD vehicles only. Part of this track follows the sandy bed of the Finke River. Heavy rains may cause this section of the track to become impassable. The track from the campground to Palm Valley is not suitable for trailers.

Palm Valley campground has spacious campsites suitable for offroad camper trailers and caravans. Fees are $6.60/adult/ night ($3.30/child or $15.40/family/night), payable via the honesty box located at the amenities block. Facilities include solar-powered hot showers and flush toilets. There are communal barbecues, taps and a rainwater tank.

Check out the full feature in issue #104 July 2016 of Camper Trailer Australia magazine. Subscribe today for all the latest camper trailer news, reviews and travel inspiration.