The best 6 outback pubs in NSW

There’s something rather captivating about a lonesome pub situated on a long stretch of nothingness or in a tiny one horse town, and nowhere does that ring more true than the outback. Here, temperatures soar and distances between shady places with cold drinks are vast. The pub becomes the meeting place for otherwise disparate locals and weary travellers alike; a social hub in a lonely landscape. It’s little wonder the outback pub is so revered.

As the editor of Travel In NSW (travelin.com.au) I have enjoyed my fair share of schooners at remote watering holes west of the Great Divide. But some are more interesting than others – for one reason or another – so here’s my selection of the most unique pubs of Outback NSW.

On the long, lonely stretch of highway north of Broken Hill you’ll stumble upon the welcome sight of the Packsaddle Roadhouse. No, it’s not a mirage and yes, the beer taps run icy cold. Quench your hard-earned thirst as you wander beneath a canopy of old boots and hats from bygone travellers in the dining hall, imagining the feet and heads that filled them in this harsh but beautiful arid countryside amidst the ancient Barrier Ranges. 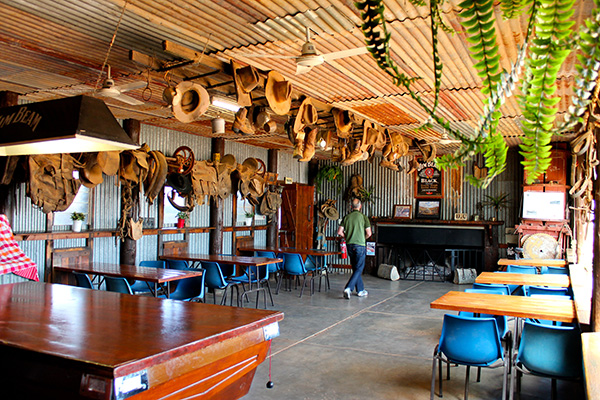 The roadhouse is surrounded by Packsaddle Station, formerly part of a larger property owned by Goldborough Mort and Co in the 1890s, and Kidman in the 1920s. It served as a horse exchange and hotel in the days of horse, camel and coach transport, and retains elements of its pastoral history in the aforementioned dining room where farming and transport relics from bygone days are proudly displayed.

Barney’s good mate, renowned Australian artist Clifton Pugh, would visit regularly for outback art expeditions and always stayed at the Family Hotel. A three-time Archibald Prize winner (including for the portrait of Gough Whitlam that still hangs in Parliament House), Pugh got stuck in Tibooburra during a flood and began painting the walls in the main bar to alleviate his boredom. The impressionistic mural is racy to say the least, with a naked devil bearing an uncanny resemblance to Pugh’s ex-wife’s boyfriend, and a number of female nudes, two of whom were inspired – rather cheekily – by the publican’s daughters. It was the free-lovin’ 60s, after all!

Possibly one of the most photographed outback pubs in Australia, the Silverton Hotel is an icon of the bush and the social hub of the quirky, ghost town of Silverton. Made famous by the Mad Max films and home to the museum of the same name, these days it’s artists, tumbleweeds and donkeys that call Silverton home, but it wasn’t always that way. The town was home to 3000 silver miners before nearby Broken Hill’s huge deposits were discovered, but the population dwindled soon after. It’s now home to just 36 people.

The pub has enjoyed somewhat of a dazzling career on the silver screen, having appeared in numerous commercials and films including Razorback, Wake in Fright, The Slim Dusty Movie, Mission Impossible II, The Adventures of Priscilla, Queen of the Desert – and the list continues. Parked in front of the pub is a black Volkswagen Beetle, a cheeky nod to Mad Max’s V8 Interceptor.

Made famous by The Adventures of Priscilla, Queen of the Desert, the Palace Hotel is a vibrant, rambling desert oasis full of lush landscape murals, taxidermy animals and a restaurant worth travelling for.

A number of scenes from the movie were shot in the pub, and it’s not hard to see why; it absolutely suits the flamboyant nature of the film. Originally known as Mario’s Coffee Palace, the pub’s Italian owner had a vision to reproduce Botticelli’s artwork Birth of Venus on a wall of the pub. A local Aboriginal artist, Gordon Waye, made the recreation of the painting, and Mario was so impressed he commissioned him to paint the entire three-level grand stairwell, the entry foyer and the front bar. His only request was that each mural include water, in keeping with his vision of the Palace as a desert oasis. The result is incredible, albeit entirely kitsch, with visions of waterfalls, horses galloping across lush fields, and more.

Rumour has it this sprawling corner pub is linked to the mines far underground by a network of secret tunnels carved by thirsty workers seeking liquid reprieve from their harsh underground existence. Rumour also has it some of them remain in the pub and its tunnels in a non-bodily form, their spirits etched forever into the walls.

More of a pub than a store (though we beer-swilling booze hounds fully condone the use of euphemism in our exploits), at Cameron Corner the only thing that penetrates the gentle whir of the wind across the endless outback plains is the belly laugh of the publican and his red dirt-encrusted guests who travelled bloody miles by 4WD to get here.

Located 140km north-west of Tibooburra via a very scenic unsealed road through Sturt National Park, a trip to Cameron Corner Store makes an idea day trip from Tibooburra and can be taken in as a loop.

As the second entry for NSW’s most remote town, the Tibooburra Hotel looks for all-the-world like it should form part of the set of the western film someone really should make out here. Budding filmmakers, consider that the hot tip. It’s a towering two-storey watering hole where friendly locals gather nightly as though it were church. You need only look to the Wall of Fame to see how much they love this place; there hang the Akubras of locals who have passed, many weathered, tattered and holey, their owner’s names written below in a sweet, understated outback memorial. For these folks, the Tibooburra Hotel is the final place they’ll hang their hat.

This elegant, old world sandstone pub offers plenty of alfresco seating on its broad veranda and serves meals seven nights a week. It has friendly service, friendly locals and air-conditioning, and that’s about all you really need in an outback pub.