When our judges cast their eyes over the MDC Explorer Forward Fold at Mt Warning, they were impressed by the features that came standard with the camper. What was even more impressive though, was the solid structural build of the base trailer that made the camper a great choice for offroad travel.

When it comes to the budget end of the camper trailer market, the order of the day is usually sacrifice. Either sacrifice the basics you need to camp for a well-built base trailer, or sacrifice build quality for a well-specced camper. Imagine my delight then, to see that MDC has managed to strike a balance on this front with its entry-level Explorer forward fold hard floor. At just a lick under $15k, this camper trailer delivers a well built base capable of tackling offroad terrain - backed by a five year structural warranty – making true adventure possible for the budget conscious. That’s a tick in my book. It has a basic but functional electronic set-up, a reasonable amount of storage for a forward fold and plenty of space to accommodate a growing family in the dinette/second bed and the annex which comes with completely enclosed walls and floor. You’ll need to bring a few items of your own – a fridge, gas bottles, jerries – but as it stands this camper promises newbies to the camper trailer world a hassle-free experience exploring the great beyond. 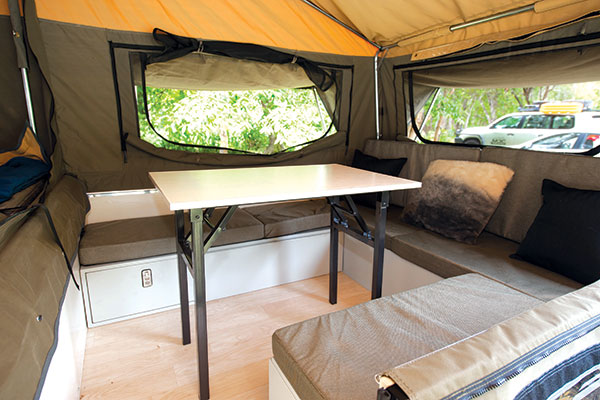 Click here for new and used MDC Campers for sale.

There are two different ways to be capable offroad. The first is adding stuff. The second is taking it away. The MDC Explorer Forward Fold nails the second one to a T. With a Tare of 1350kg it’s one of the lighter forward folds on the market which directly translates to an easier time towing it. Easier through sand, easier across rivers, easier up long gnarly hill climbs. I’ve beat on similar sized and weight campers before like they owed me money, so there’s no doubt in my mind with a little creative input on the tiller, you could easily pilot the Explorer FF through most 4x4 tracks. With the lower weight, MDC have been able to scale the frame down to 70x50x3mm which further aids in dropping the overall mass of the trailer. The whole affair has been hot-dip galvanised then left raw, so it won’t get peppered with stones on outback tracks. Likewise the camper's forward edges have all been up-armoured with aluminium checkerplate.

Underneath MDC have gone to great lengths to keep hoses and lines high and protected. The suspension also runs round bush ends with no stress points like the typical square bushes, even the grease nipples have protective collars to ensure they don’t get knocked off. While the body is a deep black it’s not your typical powdercoating either. MDC have opted for what’s known as e-coat, an electronic dipping process that boasts superior corrosion resistance which should pique the interest of beach campers.

A LAYOUT TO LIVE IN

The MDC Explorer, at less than $15,000, obviously has limits on comforts but that doesn’t mean that it has no liveability nor that its layout is necessarily restricted. With a stainless steel kitchen and a 100Ah battery, plus an input for solar, this camper has the basis of good liveability and an awful lot more bang for the buck than campers at this price point in past years.

There is limited storage space internally as the result of the shallower body, so users would need to be carrying a fair amount in the tow vehicle and having to handle a lot of stuff at set-up and pack-up, but a larger body means greater weight and higher cost.

The layout is pretty standard for a forward fold camper, and for someone on a budget it’s not bad. At the first sign of rain it would be necessary to erect the rear wall, to shelter the kitchen. Typically with imported campers there is an (unnecessarily) fussy need to adjust every tent bow and insert four spreader bars and two front uprights internally. The awning requires the installation of a lot of poles and spreaders in what is certainly a two-man job. The canvas seemed excellent, though heavier than necessary, and the roll-up side above the kitchen is always good, as were the internal covers over the windows. The single 9kg gas bottle could create the occasional minor inconvenience because when it runs out you have nothing in reserve.

A GREAT PLACE TO BEGIN

It amazes me the levels of self-sufficiency that are being supplied to campers right through to the budget level. MDC campers has learnt more than a few things in the development of their products over a successful 10 year period, and the Explorer Anniversary series is a shining example.

The Explorer is a terrific base unit with plenty of ability for extended touring. This rugged camper is packaged in a bush worthy shell that will take you places.

Power, water, shade and food are the essentials for survival and the MDC supplies all of these. There is a good level of security and comfort from the large 16oz Sherpa close weave canvas tent that features double stitching, a tropical roof, reinforced stress points plus additional seam tape, midge proof fly screens and YKK zippers. The fit out is typical of a forward fold, and features a good level of internal comfort with the Queen size bed, privacy screen and convertible dinette with storage under the seats.

The power is stored in a single 100A AGM battery which runs very little, as there is neither lighting nor fridge as standard, leaving the purchaser to add their own as options. The battery is topped up either through the Anderson plug or via a Projecta multi-stage charger, and there are digital read outs with a small switch panel and isolators.

Underneath we find an 80L food grade water tank with pressure provided by a 12V pump. This services the sliding stainless steel kitchen complete with three-burner gas stove and sink plus a long bench extension for preparation area.

Kitchen Stainless steel with one drawer and extension

Check out all the action from CTOTY 2018 in issue #122 of Camper Trailer Australia magazine. Subscribe today for all the latest camper trailer news, reviews and travel inspiration.