Chances are, if you like to explore the great outdoors with your camper trailer in tow, you’ll run into some tough terrain to conquer at some point or another. The problem is, some offroad obstacles can be pretty daunting if you’re not very experienced in this particular department, and who knows what will happen if you get it all wrong?

The good news is you’re in luck! Freezing in fear will be a thing of the past with our guide to hitting the tough stuff with your camper in tow and coming out on top. Now, that doesn’t mean it’s time to put on your favourite Superman cape and go looking for trouble; the whole idea of this little yarn is to give you the skills you’ll need to tackle the tracks with confidence and ideally make your camper trailer slightly less of a hindrance while you’re there.

So let’s check out some of the common obstacles you’re likely to come across and a few of the driving techniques and tricks of the trade that will help get you through them in one piece. 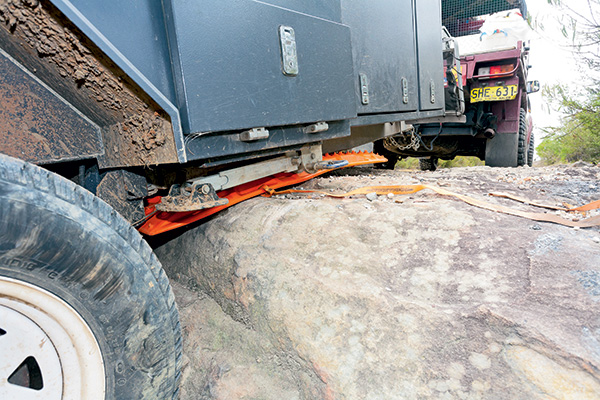 The weight of a camper trailer can really add a lot of stress to your vehicle on an incline, especially if the track surface has limited traction. But a bit of smart driving can really help out in the long run and it all starts with picking the right line and committing to it from the beginning. The idea is to look for line that will keep you entire setup as straight as possible to avoid any chance of a roll over if things go wrong. Then ensure it will keep all four wheels on the ground, which maintains traction. If there are ruts the whole way up, it’s important to understand that they can work for you, as well as against you. In other words, if they lead you straight up the hill and aren’t too deep, they can act as a great guide, especially for the trailer if you need to reverse back down again. On the other hand, they can lock you in and make it difficult to get out, which is less than ideal if they are deeper or tougher than you first thought.

On inclines, your front suspension will often unload or transfer weight to the rear axle, which means there is less weight applied to your front tyres to keep them on the ground. The end result is your steering and brakes could be affected. As you can imagine, this is exaggerated with a camper trailer hitched on the back, so keep that in mind!

The next thing is to pick the right gear and stick to it. Obviously you’ll be in low range but try and avoid choosing a gear that’s likely to run out of steam halfway up, and still offers enough momentum to keep you in the game.

It’s important to remember the weight of your camper works against you on the way down a steep hill. In fact, if there’s bugger-all traction, you’ll find hitting the brakes can be a dicey move. The reason being it allows the camper’s weight to push directly against your vehicle, which could either cause the camper to jack knife or your 4WD’s wheels to lock up and enter a slide. And once you start sliding, you’ve got no brakes, no steering and no control!

So what do you do? Well, if the brakes lock up it’s best to release them until the wheels start spinning, the engine braking kicks in and you regain some type of control. At the same time, applying the trailer’s brakes independently to your 4WD can really help pull the camper back into line and generally slow things up a bit. In fact, using this technique can help avoid this situation altogether. Oh, and a bit of rear diff lock can help keep your 4WD a little more settled as well.

As the saying goes, there’s more than one way to skin a cat, and this is particularly true when it comes to tackling ruts. Deciding on the driving technique to use really does depend on the type of rut you’re attempting. If you’re thinking about diving straight into the guts of it, there are a few things to consider. The first is: how deep are they? Will your suspension get hung up? Will your setup be on a dodgy angle at any point? These are the sort of things that can really leave you up you-know-what creek without a paddle! The next consideration is where the exit point is. It’s definitely a case of look before you leap here!

The other option is to straddle the rut. Now this is often the safest option, but it’s important to remember what happens if you accidentally drop a wheel in! It can cause all sorts of problems if it’s deep enough. In regards to your camper, try and approach the rut nice and straight so your camper’s wheel track follow directly behind instead of cutting corners and mucking things up. It’s also important to consider how sturdy the sides of the rut are; the last thing you want is for the ruts sidewalls to give away unexpectedly!

There’s a few ways to increase your camper trailer’s clearance. The simplest, and least strenuous, is to carefully pick a line that keeps your camper up nice and high in order to clear an obstacle. For example, if there’s a boulder in the middle of the track it might be a safer option to drive over it with your wheels instead of directly over the top (wheel each side), which could risk it hitting your undercarriage components.

Using rocks to build up the track can really make a big difference, but you’ll need to know where to place the rocks in order for it to be efficient. For example, if your drawbar/hitch is bottoming out big time, usually a few rocks or log under your 4WDs rear tyres will do the trick. If it’s more the A-frame, chassis or rear of the camper, then put those rocks under the camper’s tyres to prop it up a bit. If all else fails, the last resort is to wedge something between your camper and the obstacle that will help prevent any damage as it scrapes over the top. A traction aid or two will usually do the trick. In fact, you can stack two or three of these together for added support and use them as a step/ramp as well.

It’s really hard to hook a U-turn on a tight track with a camper trailer in tow, but there are a few little tricks of the trade that can really help. The first one being to activate your trailer’s brakes independently to your vehicle’s as you reverse. The idea is the trailer will jack-knife much faster than normal, which can actually be useful in some scenarios. The next tip is to mark a spot on the drawbar or stone guard to indicate when and where the camper is going to impact with your vehicle on tight turns. It saves you a heck of a lot of guess work in the long run!

One more tip: the quickest way to straighten a car and camper up after a tight turn isn’t to simply drive straight. Instead, exaggerating the turn both ways before ending up straight should get the job done a tad quicker... give it a go!

Playing it safe is central to a speedy and well thought-out recovery. So take heed of our top smart strategies that minimise your risks of injury.

The last thing you want is to get stuck between a rock and a hard place with a camper on the back, right? So, walk the track first! Heck, with technology these days, I’m surprised we don’t have drones scouting the tracks out for us!

Break out the winch

If you think an obstacle could be a tad dangerous, have a think about winching it up instead of attempting to go it alone. Winching is a great way to keep a situation or technical drive nice and controlled, and it sure beats hanging around on a precarious angle while your mates do the last minute scramble for the recovery kit!

Low range gearing goes with offroad camper trailers like apple pie and ice-cream! So, while you’re on those lower speed dirt tracks, why not lock it into low range? The lower gearing allows a bit more control and make things a much easier for your 4WD, too!

Well, there you go. The next time you find yourself in a bit of a low-range predicament it doesn’t have to be all doom and gloom. While there’s no need to go all kamikaze on the tracks, let’s just say we wouldn’t blame you if you pushed that little bit harder with your new found offroad towing skills.

Heck, anything that gets you closer to those dream destinations is a win, right?

Check out the full feature in issue #112 of Camper Trailer Australia magazine. Subscribe today for all the latest camper trailer news, reviews and travel inspiration.