How to Install a Throttle Controller in your 4WD

Say goodbye to engine lag and tap into your 4WD’s dormant potential by installing a throttle controller.

In the old days, the only real relationship you had with a vehicle’s motor was the right go-pedal, the accelerator. Funny when you think of that!

That relationship was a rigid wire that ran from the top of the pedal, through the firewall and along to the top of the motor. It was called the Bowden cable system. This system was very basic and worked okay, but as with many other mechanical forces, it wasn’t that reliable. It was prone to inefficiency, wear and tear, or failure over extended time.

Originally this cable controlled the “butterfly” flap inside the carburettor, which managed the fuel and air mixture, so the driver could select their desired speed. It rarely did more than control one mechanism. 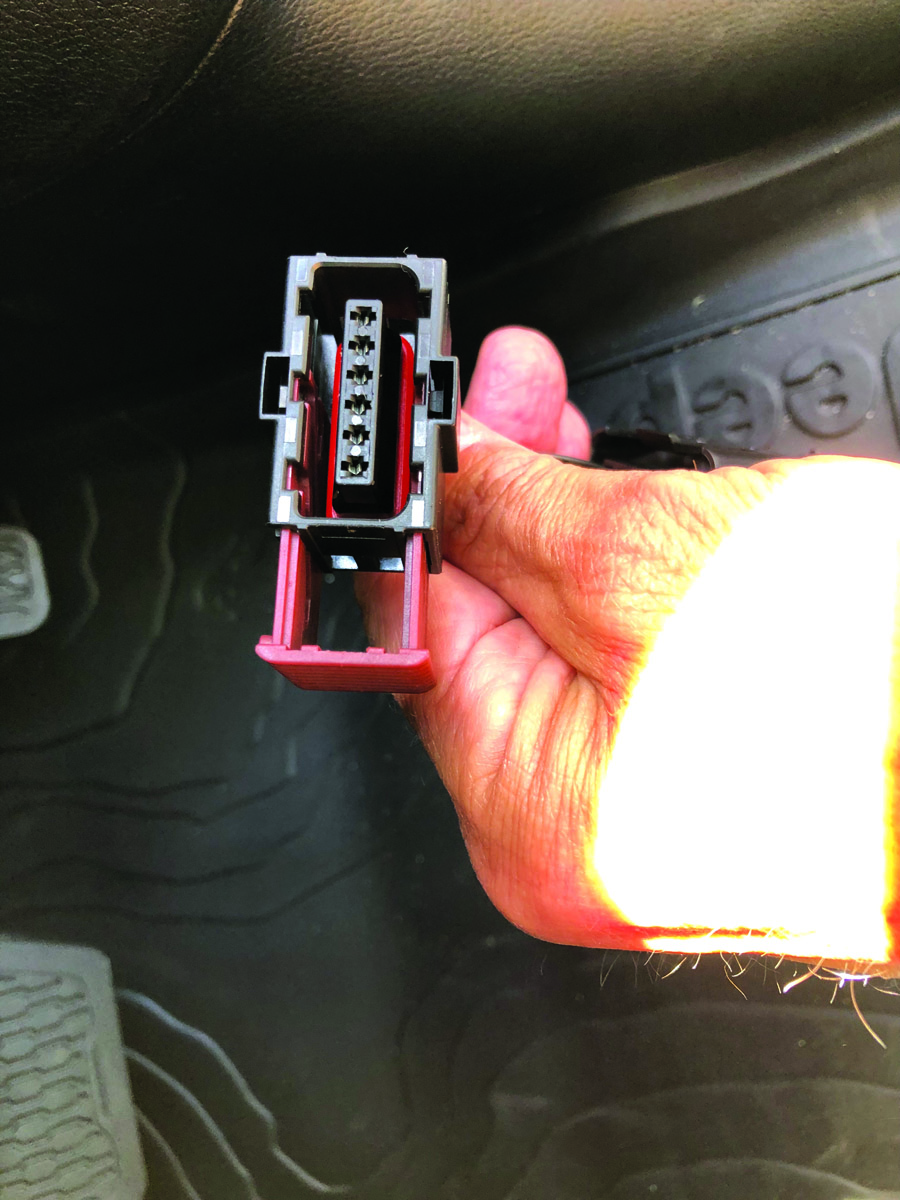 Just a single screw holds the entire assembly to the firewall

A little note before we start: Always check the terms and conditions of your vehicle's warranty before installing a throttle controller.

These days, that Bowden wire cable has become pretty redundant with modern cars. Today, just about all cars, including 4WDs, are adopting technology to improve efficiency, performance and safety, which has led to the conventional mechanical throttle wire being replaced with an electronic interface.

This system is known by various names, but the most common are drive-by-wire (DBW) or fly-by-wire (which is more commonly used in aviation circles). This DBW method is by no means a new thing and was actually introduced back in the 1980s by the German automobile industry.

Of course, in the 4WD automotive industry, carburettors have mostly been replaced by fuel injections systems, hence the need to adopt DBW. Vehicles these days fitted with DBW provide many benefits, including cheaper manufacturing costs, better fuel economy, more redundancy in case of failure, and even the ability to utilise autonomous cruise control. Best of all, DBW provides a nicer direct feel to the driver when they press down on the accelerator.

While at this point you may think DBW is all positive (and it mostly is), there is one drawback that may not be quite so obvious. Unless you own a high end sports vehicle, drivers of DBW-fitted vehicles will usually experience a short delay or lag between the pressing the pedal and the engine reacting. In other words, modest acceleration.

I guess this is in line with the manufacturers’ intention and will vary from vehicle to vehicle. However, I can assure you from personal experience that many 4WDs can overcome this deficiency and have the potential to unleash hidden performance that could very well surprise you.

I’m not talking about pricey and complicated things like super-charging your petrol monster or increasing the size of the turbo on your diesel ute. I’m taking about fitting an electronic throttle controller to a modern 4WD.

A throttle controller is an intricate yet inexpensive device that ensures the best throttle response for any driving situation or driving style.

It’s a powerful and very useful device, yet it’s very easy to install, use and benefit from. In simple terms, a throttle controller adjusts the voltage of the DBW unit, which allows the driver to tune the response from the accelerator, which greatly reduces any throttle lag or delay. In the world of 4WDers, it instils some WOW factor!

I’d had a throttle controller in my previous 4WD for over five years and I knew all the benefits of fitting one, as it was easily one of the best and most satisfying modifications I’d ever made. It transformed my Jeep to another level. So I didn’t hesitate to get another one, to be fitted to my new Wrangler.

Throttle controllers in Australia have been a popular add-on since about 2012 and are available for most conventional and 4WD vehicles built since the beginning of this century. There are several throttle controllers on the market but when it came time to pick one, I didn’t hesitate in choosing iDrive (www.idriveaustralia.com.au) for my requirements.

Their throttle controller had been very satisfying in my previous 4WD and many of my mates speak highly of them too. iDrive have been in Australia since the beginning and are now respected as the leading supplier of throttle controllers Down Under. While I may not fully understand claims like “It delivers a sharper throttle curve”, what I do know is that it simply works.

So after checking iDrive’s website and using their online shopping cart, my new iDrive was delivered next day by express post. The iDrive interface/unit is the same for all vehicles, but the patch lead is different based on the model of vehicle you select. If in doubt, a quick phone call to iDrive on 03 8740 1170 will confirm availability for your model. I’ve been led to believe that there are over 400 vehicles that can benefit from an iDrive device.

The unit is so nicely packed and presented that at first glance, I thought I’d had been sent a new iPhone!

The beauty of the iDrive unit is the simplicity of installation and use. Anybody can do it and it requires no tools (well, almost no tools) or great skills, except perhaps a torch and some dexterity to access under the dash near the accelerator.

A plastic panel remover or small screwdriver may help prise apart any stubborn connectors. It is literally an under five minute undertaking and does not need any modification to body panels or dash. What’s really surprising is the fact you can easily remove the iDrive if you wish, leaving no evidence that it had ever been there. I doubt you would.

The iDrive consists of the unit body, half the height of a standard match box, and connecting wire, with the plug-in interface specific for your model vehicle. One thing I’m pleased about is the sturdier insulated wire, compared to my previous model, which — even though it never failed me — had a very thin and flimsy cable that was tricky to secure and was excessively long for some strange reason.

The first thing to decide is where to place the main interface such that it remains accessible from the driver’s position, even though it’s not a device you need to interact with on a regular basis. It’s mostly a set-and-forget device (but more on that later). For me, I found a position on the right of the steering column, but perhaps left handers may use the other side. Pick you preference, clean the area with the supplied swipe, peel the double-sided tape and carefully place it in position. You don’t want to it to interfere with other vehicle controls.

Next, I carefully routed the wire between the steering column and the dash and temporarily laid it aside. The tricky part, if you can call it that, is to use agility of hand and body to detach the drive-by-wire plug/sensor, which is located near the top of the accelerator pedal. Personally I detached the pedal assembly (one screw) for easier access, but you may not need to.

Depending on your model vehicle, you’ll need to squeeze the fastening clip and/or slide the locking tab before carefully separating the main loom from the pedal’s sensor. Using great care, I grabbed the iDrive’s wire/patch lead and inserted one end into the vehicle’s original wiring loom until I felt that reassuring click. This was followed with the same procedure with the other end, into the sensor on top of the accelerator. Then I slid the locking clip into place.

Take care when making these connections that you align them straight-on. The connecting pins are quite delicate and the last thing you want to do is to bend any of these pins.

Once I was satisfied that the two connections were locked in, I used the supplied cable ties, plus a few of my own, to secure the excess wire so that nothing could be snagged or compromised. At this point the five minutes of hard work is done. Time for a cold beverage.

The iDrive’s interface consists of just two buttons and a small LED screen, making it very easy to set up and use. The supplied two-page instructions are pretty simple and can be easily understood by anyone. The iDrive stores your last settings and the first task is to inform it if you have an auto or manual transmission.

While there are three settings/modes plus off (off returns it to standard operation), I personally found for my 4WD that the Automatic Control (A.C.) option was the best and most rewarding for normal everyday driving. This unique feature chooses the best throttle response based on your accelerator position. It’s simply amazing at injecting extra wow into the 4WD with no lag in engine response when you press that accelerator.

Personally, I couldn’t see the need for economy mode, but others may be more enthusiastic in trying it out. As for the ultimate mode, while it’s fantastic and I could actually make the 4WD spin its rear tyres, I’m just looking for better throttle response when I need that extra kick for overtaking and managing everyday driving. While I’ve yet to personally test it, I’ve been led to believe that fitting a throttle controller is very worthwhile when towing, especially when taking off.

But... not everything went to plan. After a few days I noticed the vehicle’s remote start would no longer work. A quick call to iDrive support confirmed that I’d been mistakenly sent an out-dated unit. The correct unit was on my doorstep the next day. Happy days.

4WDer’s needs may be different but I’m very confident the iDrive will deliver. It certainly does for me. I must emphasise that the iDrive does not increase the vehicle power output, but rather unleashes the latent potential of your 4WD. Even though iDrive don’t claim to improve economy, I personally found that because of it I altered my driving style, which seemed to improve the economy of my vehicle.

iDrive’s sales and support have been excellent for me, with both my previous unit and the current one. That’s why I think you should consider installing a unit in your 4WD.

A highlight of choosing an iDrive unit is the lifetime warranty for the original purchaser and the 30 day return policy if you’re not a happy camper. I’m sure that won’t be the case... so with a generous return policy, why not give it a go? I’d be happy to hear what you have to say.

throttle controller d.i.y. diy do it yourself how to idrive 4wd technical guide