Preparing for the outback

The older I get, the sillier I get. Hang on, that’s not right, that’s just what my wife wants me to believe.

In my formative days, travelling the bush, the preparations – and the machines –were pretty bloody dreadful, to put it mildly. My first trip up to Cape York was planned while brooding over a map in a garage in Cairns, having just been dumped by the love of my life. Okay, so the love of my life for the last fortnight anyway. We’d met down south when she’d been holidaying and I’d followed her back home to Cairns. She’d flown; I’d ridden my old motorbike. I got to her place just in time to meet her new boyfriend.

So you could call that a lesson in preparation for starters. A bloke should have done some homework, or at least let her know I was coming. 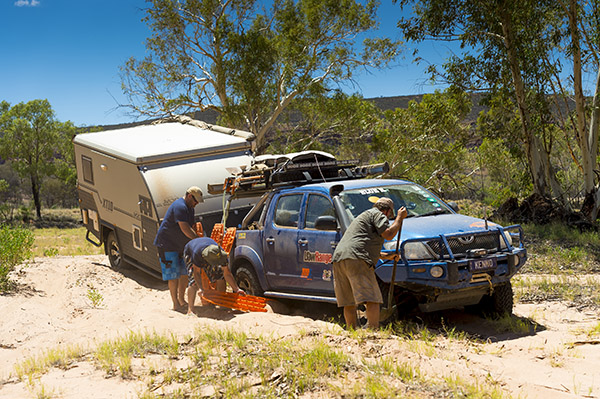 The map said there was a road all the way to the top of Australia and, with little red marks that must be towns every hundred or so kilometres apart, I figured ‘why not?’ The bike was a 1959 BMW – known for reliability, even then when it was 15 years old – and I had some elementary tools, tyre levers and a patch kit.

I also had no idea that the red marks were homesteads and the road was a track weaving through the bush when it wasn’t crossing rivers and creeks. But adventure knows no bounds when you’re young and stupid, so off I went.

Four months later, I’d made it back to Cairns just before the onslaught of the wet season. It was one of the best adventures of my life but, in the end, pure luck and a lot of hard slog was what got me through. And also the complete generosity of the Cape locals I met along the way who put me up and found work for me and generally laughed at the naivety of this young pup from down south.

These days, I’d no sooner try that as jumping out of a perfectly good plane. Especially given the state of outback travel accessories and knowledge now, which pretty much allows almost the impossible to be confronted and safely won – as long as you know how!

That knowledge starts with a good appreciation of what’s available and a little bit of common sense when it comes to making your purchases. I know, you’ve already Googled yourself silly checking out the merits of various clobber, and if you haven’t then may I suggest you do?

Just watch out for the so-called experts who heard their version from an uncle who won the last war single-handed!

Anywhere close to sand or potential mud and you’ll need to start thinking about recovering vehicles. In the old days, we clawed out holes with our knuckles and filled them with brush chopped down with a nail file – try telling the kids of today that! Nowadays, we’ve got Maxtrax, the bright orange ‘planks’ that can dig sand as easily as they can extract a few tonnes of vehicle. Beware, there are imitations! The originals will last a lifetime because they’re made from super resilient plastics. If imitations are guaranteed for a year, then that screams the difference!

Great, and there’s some wonderful winches and snatch straps available too. Once again, do some homework. Not all that glistens has integrity under the paint.

Filters and fresh oil are the cheapest insurance any outback traveller can have and that sort of stuff begins before you even leave. I always carry a spare air filter anyway but you can extend the life of those with some common sense precautions. A snorkel is a wonderful thing, sucking air from above instead of from under a dust-crowded bonnet, but if you really want to take it easy on your motor, make sure you’re allowing plenty of room behind the vehicle in front so the dust can settle.

Fuel filters are vital. These days, vehicles have them fitted as standard and they’ve become so good most drivers wouldn’t even know where to find them. You should know, and you should have a spare. It wouldn’t hurt to watch someone swap one out on YouTube before leaving home either!

Talking vitals, every traveller knows you never head bush without the traditional spares – belts and hoses for the engine. In my day, I have tried the old ‘stocking substitute’ for a fan belt and believe me, it’s crap unless you’re limping the kilometre to an Autobarn or similar.

In the days of simple Holdens and Falcons, it was easy to check if the belt they supplied was the one you needed. You just wrapped it around the pulleys and guessed. These days, belts come with specific codes, so if you can see the ones on your vehicle and check them with what you’ve been sold, then wonderful, you’re a winner. But as someone who’s helped plenty of people out over the years, I can tell you from experience – it’s amazing how many folks have travelled for years with the wrong spares in the back of their truck. Terrain Tamer made that easy with their vehicle specific kits, and one of the things I love most about these is that they include all the bits you’re probably going to need, too. Yes, I am the guy who’s chiselled off old hose clamps because there was no other way!

So I guess that’s a good place to end this little yarn. Before I go and pack the truck though, can I just mention that no amount of undone must-do’s on your pre-trip checklist should ever put you off heading bush. Just tailor the trip accordingly, and take your adventure in a dose that suits the medicine you’re carrying.

Go on, get out there!