Back for a second crack at CTOTY, easily the most distinctive camper on the market, the Air OPUS OP4 revolutionised set-up time and internal space in a crowded market but there is a lot more to it, as we found out.

The entire OPUS range has to be one of the most innovative on the market. Their unique take on both the tent and the awning was seen as a gimmick when they first kicked things off but has proven itself as both reliable, and a real timesaver. But there’s more to the story than just a clever setup, and as the second cheapest camper in the field, it’s quite a convincing story as well.

Despite the almost gimmicky image of the inflatable camper trailer, the OPUS OP4 is actually a serious offering filling a hole in the market no one else seems keen on capitalising on. It weighs up to 400kg less than its competition, doesn’t have a single pole to be adjusted, and can sleep a family of 6 with a price tag of $5,000 less than their competition. It’s the definition of affordable, easy, family camping. The OPUS straddles the line with innovation. On one hand, the inflatable tent and awning are absolutely brilliant. They may not save any time with the tent setup, but they mean you can be setting up the kitchen or getting bedding ready while the tent is going up. It’s still leaps and bounds ahead of 90% of hard floor campers.

The chassis is also quite clever too. Extensive use of stringers and C-Channel help to keep the weight down, massively. But then it's sporting an old domestic style kitchen, minimal storage, and average quality of finish. If they applied the same brain power from the tent to the rest of the trailer the OPUS would really be something special.

It almost feels like the OPUS is too cheap here. It’s lighter, more innovative, and quicker to set up than all of its competitors and still comes in cheaper.

At $37,800 as reviewed, the OPUS OP4 is up to 450kg lighter than some of its nearest competitors and is cheaper and it has no poles to struggle with! All of this makes this rig a great place to start for buyers interested in pursuing a dual-fold camper lifestyle.

The model we reviewed had an optional 3000-watt Imperium inverter, as well as the MyCoolman 96-litre fridge. Meanwhile, the twin 105ah lithium batteries with upgraded AC and DC chargers are optional (an around $2000 option). While the camper’s fixtures and fittings are largely generic, and the aesthetic is austere in places, the OPUS OP4 still offers most of what you need to set up happily near a beach somewhere, indeed anywhere, and simply enjoy the world around you.

Looking underneath, there’s a distinctive galvanised steel chassis with an aluminium framework to support the flooring above the chassis. This structure is one of the key characteristics that keeps the OP4 ATM under 2000kg. But it’s above the waistline where the OPUS really earns its stripes.

OPUS Campers boast an absolutely distinctive concept for a camper trailer – an inflatable tent that requires no poles at all; a weight-saving characteristic in itself. A design with its origins in the military context where it’s typically used to generate deployable hospital facilities for expeditionary forces, it’s remarkably well suited to a camper of this type. 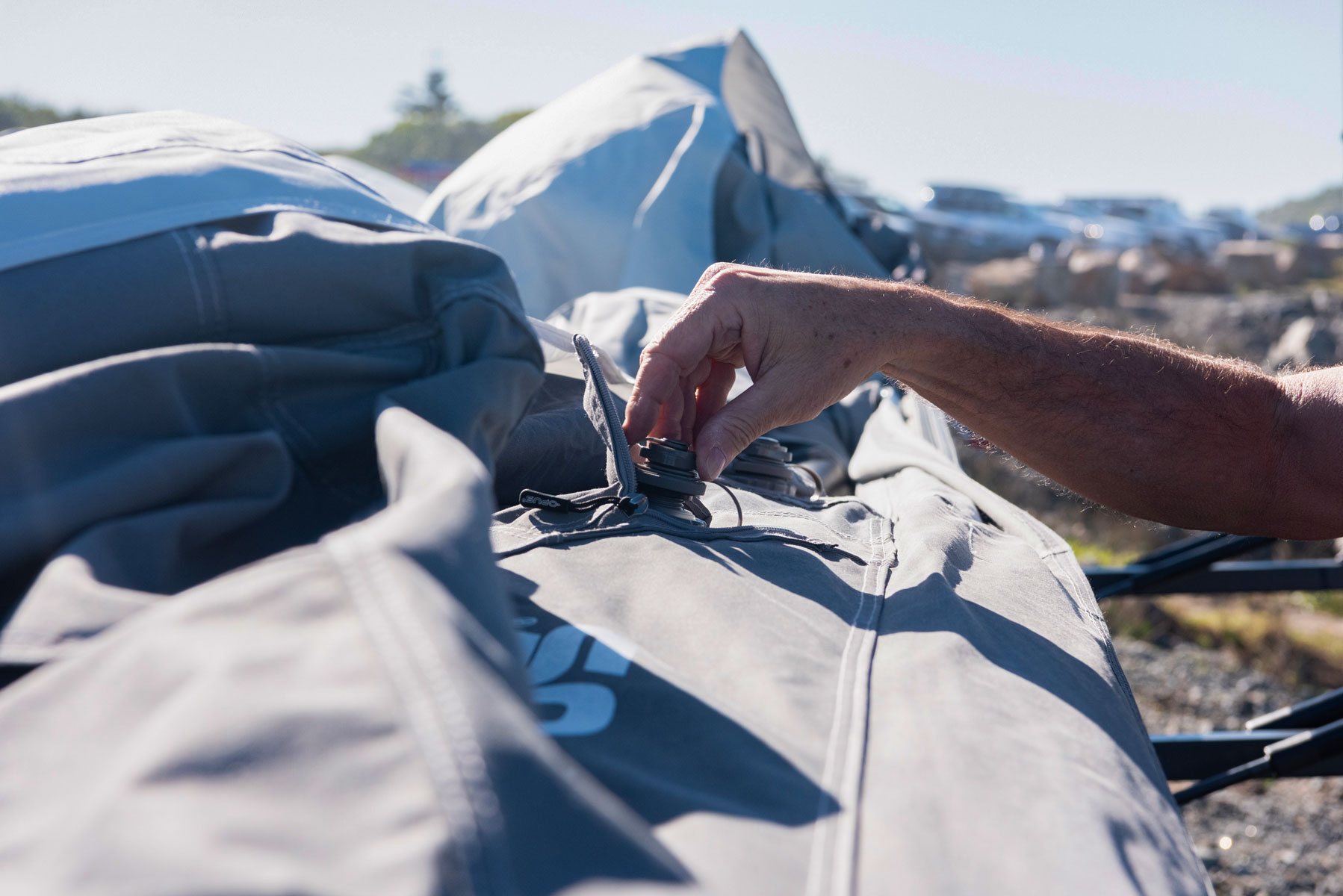 We saw OPUS last year at the CTOTY 2021 event, and the process of inflating the tent put a smile on everyone’s face. It was no different this year, except during a malfunction at the photo shoot which required the deployment of a foot pump. Ordinarily, however, this would have to be one of the few campers on the market where the kids will want to get involved in the set-up. Just press a button, stand back and watch – in under five minutes it’s all done. The only thing the kids would probably like better is if it unfurled into a jumping castle.

The camper we judged had plenty of lithium power with 210Ah, more than enough to keep the fridge and lights running for days, maybe weeks. If you’re camping off-grid, you will need to buy a solar blanket or portable panels to help keep the batteries charged when you’re not driving. Keeping track of the state of charge is via a basic voltmeter.

The OP4 holds 160L of water in a couple of tanks and cold water can be accessed via the kitchen sink. You can option up a portable hot water service for showers and wash up, but you will need to keep an eye on the water levels.

The fridge slide will fit a 96L fridge and it resides in the front toolbox. The slide-out kitchen has good bench space and a drying rack that keeps things off the sink, but the 4-burner stove uses the cast iron surrounds that need to be cooled before you can insert the polystyrene when it's time to move on. The annex comes standard and can remain attached to the main tent as it will; inflate at the same time. This provides good shade and protects the kitchen area and fridge access during inclement weather.

The canvas of the tent section and awning is 340g microwave polycotton which is tough and quite easy to clean; red outback dust not quite so much but that is the same with all canvas. The main body of the OP4 has a 2-Pac baked enamel finish and comes in six colours. The body of the camper is an aluminium frame with a composite panel exterior and foam insulation that sits upon a fully galvanised chassis.

The dual seals on the body of the camper are good quality and prevent dust and water ingress, something we can back up having taken one on our Outback Pub Experience adventure through Outback NSW.

The leatherette upholstery has a good look and feel, and the LED strip lighting sits neatly in inserts along the roof. Cabinetry is a simple timber laminate but being white it does mark easily. Underneath has a black base paint over the base and chassis that offers added protection to the galvanised steel chassis. I did note that the gas line to the kitchen ran underneath the chassis instead of a nearby hole in the chassis that would have been safer.

I have a little more insight than the rest of the judges on towing an OP4 as I've done over 20,000km with one and although the undersides took a bit of a hammering it went everywhere I did including river crossings well deeper than the warranty allows and moments airborne.

For towing, it is as good as any other folding camper its size, if not a bit better. You need to watch the leading corners in river entries and off banks and it is wide and long enough to have to watch out on corners in the bush. Its comparatively low weight made it a breeze though with regular long-distance runs averaging around 12L/100km towing with an MY21-22 D-MAX.

Living with an OP4 is pretty straightforward with the standard-fare kitchen up to feeding a tribe. Where it excels is inside. Fully inflated, the OP4 is cavernous. It dwarfs full-size caravans for internal space and although the lounge features upright backrests and short-ish seat heights, it’s a great place to hide from a storm or bugs.

The beds are both big with one a double and the second able to be extended to a King size. The mattresses are OK for a night or two or for five or more as they are thin, like most folding campers, so you’ll put it up with it for a few nights or get used to it. Adding a gel topper is something I’d look into. Setting up an OP4 is a one-person, two-beer affair. I’d crack one between unhitching and getting the drill out for the stabiliser legs, have that one done after unclipping the lathes and rolling over the roof rack/boat carrier and start another one after hitting the button for the electric pump. No lies, it takes bugger all time (maybe 3-7mins) and almost no effort to set up the OPUS OP4. It is fun for everyone and so, so simple.

Best of all, there are no bloody poles for either of its optional awnings. Have the awning screwed on before you start inflating and it’ll inflate with the tent. Then just peg it down and you’re done. I hate poles, I love this about the OP4.

But Dan nailed it when has asked what would happen if OPUS put the same brain power and effort into the trailer as they do the self-inflating tent. I reckon if the OPUS OP4 was $65-80k and had a locally made, quality body and chassis under it, it could well be the best folding camper by leagues. Just saying OPUS, I’d buy one if you did.