In 1986 it was proclaimed a national park and named after one of the expedition members, Fred Litchfield. Today, the magnificent waterfalls and crystal clear plunge pools of Litchfield National Park attract more visitors than the amazing Kakadu and beautiful Katherine Gorge combined.

Our first time in the Top End we travelled with a tent and since then, seeking the perfect camping option, we’ve had a couple of softfloor campers. But this was the maiden voyage of our new, refurbished 20-year-old hardfloor, flip top camper. After our first night we voted it as the best camping investment we’ve ever made.

If we’d had a tent, or softfloor camper requiring tent pegs to set up, we would have had no choice but to backtrack half an hour and set up in one of the caravan parks between Batchelor and Litchfield NP. They’re all very pretty and friendly caravan parks, mind you, but our preference is always for bush camping. 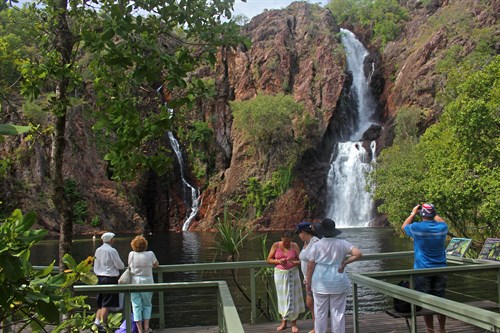 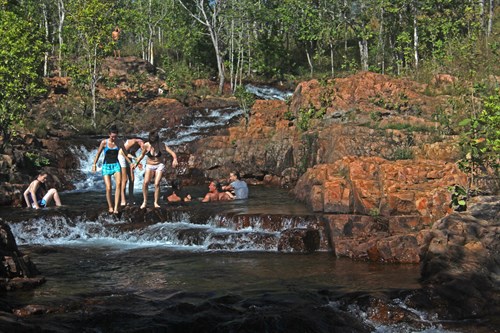 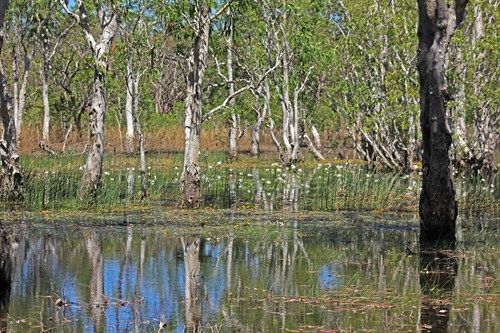 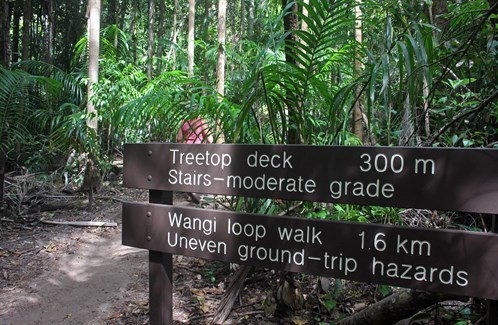 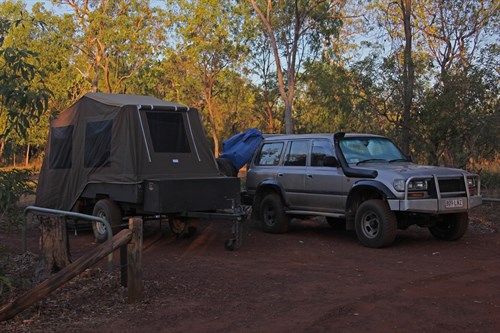 Setting up the flip top took just a minute — park, flip and sit. No tent pegs; just adjust the legs to get the bed level and Robert’s your relative. Within five minutes we had the cooker out frying up dinner and had already done some wilful damage to an innocent bottle of red.

Litchfield’s waterholes are legendary and, due to the selection of our first night’s campsite, the plunge pool below Florence Falls was the first stop on our rediscovery of this beautiful paradise. Though it became immediately clear I’d need to wake earlier for the chance of an uncrowded morning photo op across still water. Even at 7.45am there were at least 20 people swimming in the plunge pool at the bottom of those perpetual, groundwater-fed cascades.

Look for the pathway that’s signed "Picnic Area"; it leads you on a great bushwalk a little way upstream from the falls. You’ll pass a number of designated swimming areas in Florence Creek, and several picnic spots complete with wood fire barbecues. It’s a short stroll and you hardly realise that you’re walking uphill.

If you’re feeling a little bit more adventurous, continue along the Florence Creek walk and soon you’ll arrive at Buley Rockhole (pronounced "b-yoo-ly"), probably the most popular swimming area in Litchfield. It’s an easy 2.5km walk on a concreted pathway, with four or five designated swimming spots to drop in and cool off along the way. Mostly the swimming holes are below small cascades, and mostly they are empty of tourists. When you reach Buley Rockhole you’ll find not one, but a series of plunge pools stepping down the hillside, linked by cascading water.

The authorities have erected "Designated Swimming Area" signs to allay visitors’ fears of crocodile presence in specific swimming spots. Where you see these signs it means crocs are not known to inhabit the area. According to my research, no crocodiles have ever been reported in Buley Rockhole, which is good because this is arguably the best swimming hole in the Top End.

Unlike Wangi Falls, (pronounced up here as "wong-eye") which is closed for swimming every wet season due to the crocs. After high rainfall the water levels can increase sufficiently to provide access for salties into the plunge pool at the base of Wangi Falls. In fact, Wangi Falls was only re-opened for swimming the day that we arrived after being closed because of a reported crocodile presence, unusually and unfortunately, at the height of the tourist season.

The signs say that the park’s management program is designed to minimise the risk of estuarine (saltwater) crocodiles entering the pool. Call me a chicken, but when it comes to sharing the water with a croc, the only risk I’m prepared to take is zero! Minimal doesn’t quite cut it for me — I only swim where I am certain it’s croc-free. The top of a waterfall is a good spot as crocs aren’t known to be rock climbers, which is why the pools at Buley Rockhole are considered safe.

Despite its occasional dangerous denizens, Wangi Falls is a lovely, picturesque picnic spot and on a hot Top End day, walking into the shade near the water is like walking into a giant natural air conditioner. Every time I visit here, I think how welcome this sight must have been to those first European explorers who dared venture into this region.

NT National Parks is very good at making its parks interesting and visitor friendly. At Wangi Falls there is a very pleasant boardwalk around the edge of the pool which, for those looking for a more than just a stroll, leads onwards and upwards to a 1.6km-loop walk through the top of the rainforest canopy and up across the top of the falls. The pathway is a little rugged in spots and the descent is via a steep, at times rough, pathway.

Litchfield NP is a wonderful place to camp for a few days but, even if you only have a day to spare, it offers a great experience that you will long remember. For many it is the highlight of their Darwin trip. Most of the driving is on an excellent sealed road, however some of the most interesting attractions are down 4WD-only dirt tracks, with a few creek crossings. There’s the Lost City; this naturally-sculptured cityscape is well worth the drive in.
Another side trip is to the historic Blyth Homestead, a poignant history lesson on life and survival in the Aussie outback. From ’28 until the ’60s this basic, dirt-floor single room dwelling was home to the older kids of a local landowner, where they contributed to the family’s income by digging tin from a nearby mine.
Dad, Harry Sargent, would drop by with supplies every six or eight weeks. Inside the homestead is a book with photographs, a bottled history and some amazing tales in the children’s own words of what life was like in those tough years. Another side trip is Tabletop Swamp; make sure your camera is charged, the birdlife and scenery are stunning

If you don't want to miss out on all the latest news and reviews, why not subscribe to the monthly CTA magazine.