The bushfire that raged for almost three weeks around the tiny south west town of Northcliffe in Western Australia was declared a natural disaster, eventually burning out over 98,000 hectares. A lightning strike in the Shannon National Park sparked the event that razed some of the most magnificent karri forests in Western Australia. The news took our breath away: we’d only been camping there weeks before.

A shimmering glimmer of hope, for campers at least, is that the Shannon National Park campground was spared, as was the Day Use Area to the north, from where various stunning walks through the forest commence. Although extra care on the approach may be required as emergency services continue their important work, a return to this most majestic site where ample forest remains will help communities keep the faith and rebuild their lives when camping resumes.

The Shannon National Park is between Pemberton and Walpole and covers nearly 60,000 hectares. Although a working forest, many hectares remain in a virgin state, containing soaring old growth karri trees over 90 metres high and estimated to be over 350 years old. 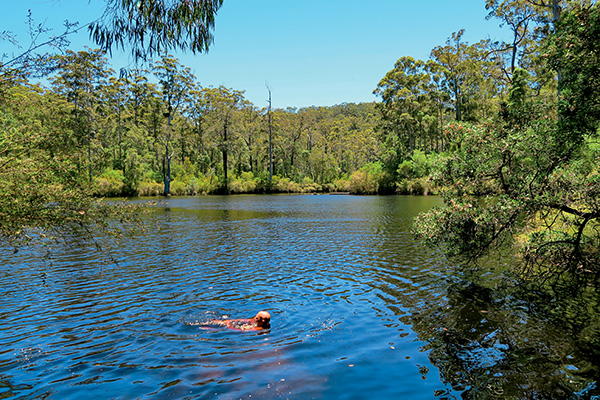 Bushwalking is of course very popular in Shannon NP, with the 5.5km Rocks Walk Trail a favourite. Classified as a class-four trail, it must have only just missed out on a class-five rating as it had some very strenuous, steep sections to negotiate.

It all starts off quite sedately with a narrow, packed dirt path and boardwalks over the small streams. On a small offshoot path there is a wooden hide which is marked on the map as the Quokka Observation Shelter. The trail meanders amongst towering karri trees and huge jarrah trees, with Mokare’s Rock, a granite outcrop protected by a wooden boardwalk, marking the highest point of the trail. From here you have sweeping views across the forest before you begin the descent back down towards the Shannon Dam.

From the time it was built in 1949, the Shannon Dam has been a popular recreation area. After our strenuous hike, the boys were up for a swim and declared it cold but good. The dam is quite extensive and would make a very picturesque place to kayak or canoe. This is not recommended in the rest of the Shannon River due to shallow sections and natural obstacles.

As well as via the walk trails, the dam is easily accessible by car at one of the picnic stops on the Great Forest Trees Drive. The drive is a 48km, 2WD accessible unsealed trail that winds its way through spectacular old growth karri, jarrah and marri forest. There is even a dedicated FM radio commentary which you can tune into along the way. Each segment is about four minutes long and contains a range of material including stories from former pioneers and mill workers, information about tree identification and forest ecology.

Allow yourself a couple of hours to take in this drive trail. The road is not sealed but is generally in good condition and is well signposted. The drive starts at the Day Use Area and finishes at the campground. It is a one-way route with no allowance for turning around for a pleasant drive, free from oncoming traffic.

The campsite is found in the defunct Shannon milling town, which was established in 1948 and closed in 1970. As a result, northern hemisphere deciduous trees are interspersed between natives affording shade to campsites catering for single parties to large groups camping in tents, caravans and camper trailers.

The host immaculately maintains a set of ablution blocks containing many en suite-style bathrooms with flushing toilets and wood-heated hot water showers. They are some of the best facilities we’ve ever come across, especially in a national park, and are made possible due to water supplied from the Shannon Dam.

Shannon NP is 33km east of Northcliffe via Middleton Road, 55km south of Manjimup and 65km north of Walpole on the South Western Highway.

The campsites at Shannon NP are offered on a first in best served basis. Camping costs $10 pp pn, $6.60 pp pn concession and $2.20 per child pn.

Campfires are usually permitted between April 15 and November 30 but fire restrictions may be imposed at any time. Bring your own firewood and only make fires in the fire rings provided.

At the time of printing the campground was closed due to damage to a water pipe incurred during the fires, but it is expected to be open later in the year. Visit www.parks.dpaw.wa.gov.au/park/shannon for general information or phone (08) 9776 1207 for an update on the current status.

Check out the full feature in issue #89 June 2015 of Camper Trailer Australia magazine.